Sylvis
FoxyBearGames is a notable and well-established member of the Loka community who joined on January 1st, 2017. He is known for his roles as Owner of Sylvis, Guardian, Former Sentry, Community Representative, Loka Historian, Leader of Greater Sylvis, Governor of The Commons, PvE Developer, The Drunken Pope of Skymanity, an instructor in the Loka Academy, among many other things.

FoxyBearGames joined Loka on January 1st, 2017 and has been actively playing since. After initially joining the server per the recommendation of Christian7573, he quickly joined the town of Cornerstone. Cornerstone was a town founded upon a tile next to the Garama docks and was owned by Marioistrash, Christian7573, and Pac_Man_. The town itself was built very simply without much merit to it, however was still considered to be a fine home by it's residents. Shortly after it's founding, Cornerstone would soon look to The Garaman Federation as a close ally and friend.

Eventually Christian7573 showed interest in founding a new town on Kalros, to be dubbed Lightvial, however Lapizsword, FoxyBearGames, and Preyton2 would expedite the process and choose to found it on Garama, leaving Christian7573 in CornerStone. Lightvial was a short-lived Jungle town which died due to inactivity of it's members.

After the death of Lightvial the expanded group of Christian7573, Lapizsword, Preyton2, FoxyBearGames, ErekLaser, drawesome11, and ButterSamPlayz would found the original idea of a town on Kalros, and would this time name it FrostVale. The town would be somewhat successful, however would end only a few months after it's founding.

FoxyBearGames would go on to be one of the leaders of Los Alamos, however would part ways with the town one last time in July of 2020 and move on to form the town The Mickey Mouse Clubhouse, which was renamed soon after to The Clubhouse Resort, and eventually the Alamos Resort. The town was founded by FoxyBearGames and MyNameAintDiego to build a replica Mickey Mouse Clubhouse, however the plan would change to building a resort. The town would form the Alamos Empire with Los Alamos, and would be deleted just a month after it's founding when the group chose to consolidate into Sylvis. 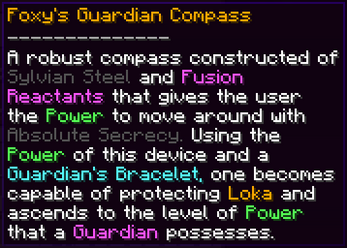 FoxyBearGames had two attempts to ascend to the level of Guardian, the first of which was too early in his training as Sentry, however the second of which succeeded. He became a Guardian on September 26th, 2021, and joined the team of seven which included bat3415, Skuhoo, RedskilZZ, DeceitfulPear, jibblypop, FatalDeath, Thanius, and FatalDeath. This makes him the 40th Guardian Loka has seen, and puts him in the 27th Generation of Guardians.

Community content is available under CC-BY-SA unless otherwise noted.
Advertisement